The food metabolome is the part of the human metabolome directly derived from the digestion and biotransformation of foods and their constituents. With over 25,000 compounds known in various foods, the food metabolome is extremely complex, with a composition varying widely according to the diet. This variability constitutes a unique and extremely rich source of information on the human diet, which can be used for pusposes such as accurate monitoring of dietary exposure and identification of foods that influence disease risks. 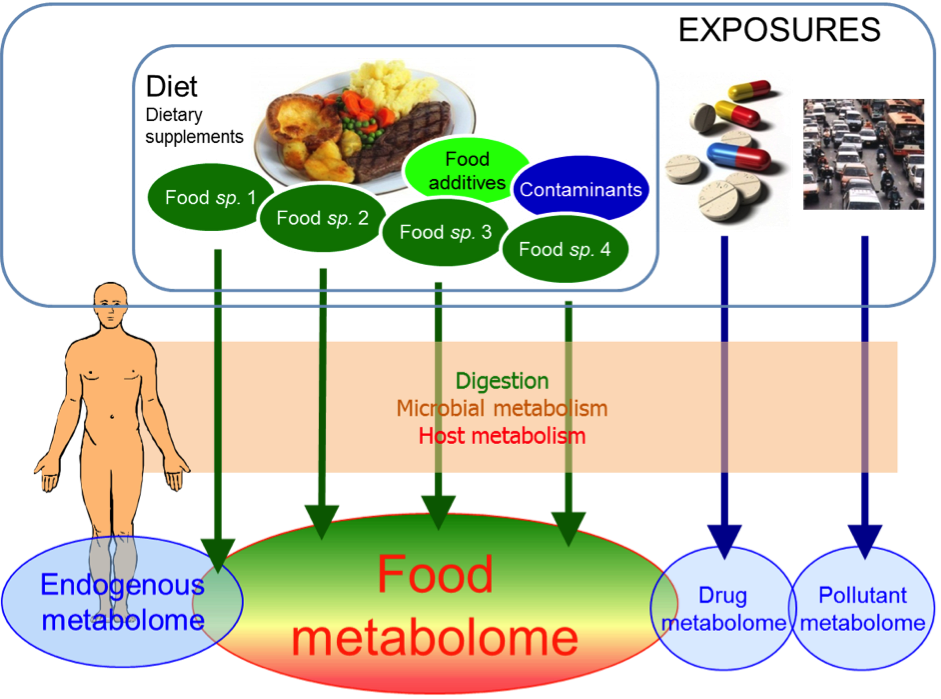 Early metabolome studies allowed scientists to realize that the human metabolome was not as small or as simple as first imagined. In particular, noticeable differences in human metabolomes could be detected that appeared to depend strongly on diet, gender, health status, genetics, kinetics, physiology and age -- with diet being most important (, , , ). Though the dietary dependence was not unexpected, it was much more complicated than anticipated. This is largely due to the fact that unlike laboratory animals, humans are free-living omnivores who eat other metabolomes and are also exposed to a huge variety of chemical environments associated with the foods we consume. Thus, the human metabolome is not just a single entity but it consists of several components including: 1) the endogenous metabolome (consisting of chemicals needed for, or excreted from, cellular metabolism); 2) the food metabolome (consisting of essential and non-essential chemicals derived from foods after digestion and subsequent metabolism by the tissues and the microbiota); 3) other xenobiotics derived from drugs; and 4) xenobiotics derived from environmental or workplace chemicals.

This complexity makes the exact size and composition of these different human metabolomes is difficult to ascertain. It is believed to encompass at least 50,000 different detectable compounds (, ) but as instrument sensitivity and separation technologies improve, this number is expected to grow further. The plant kingdom, for example, is estimated to contain up to 200,000 different metabolites, with combinations of several hundreds of secondary metabolites characterizing each edible plant and thus entering the human food metabolome (, , ). Further complexity is introducted by the fact that metabolic transformation of compounds within the body means that composition often depends on the body compartment, tissue or biofluid. For instance, food and drug constituents found in the mouth or stomach are often chemically identical to the compounds isolated from the intact food or drug. On the other hand, food constituents found in blood, urine or other excreta are often metabolically transformed in the liver, kidney or intestine to metabolites that are very different from the parent compound. The importance of the gut microbiota in contributing metabolites to the human metabolome has also recently emerged (, ). Microbial metabolites are typically vitamins, certain essential amino acids, and a few fatty acids (about 100 compounds in total are known at this time). However, a large majority of the metabolites produced by the gut microbiota are derived from the biotransformation of both the endogenous metabolome and the food metabolome and are therefore an integral part of both these two metabolomes. These microbial metabolites include short chain fatty acids, secondary bile acids, protein and amino acid metabolites as well as plant polyphenol metabolites (). These factors add greatly to the diversity of the food metabolome.